On Sunday morning, in a tiny park, a large crowd, heavy with bishops, gathered to pray for an end to gun violence. But we were challenged to do more than to stand still and pray.

First, we heard from Philip Schentrup, the father of Carmen, who died at the age of sixteen, at the whim of a gunman and his bullets, on Ash Wednesday, on Valentine’s Day.

As this father described his dangerous grief – “I was barely able to carry on” – his very presence among us screamed of resurrection. But of the kind which carries its marks, the hole left by the spear in the side, a heart never healed.

Well-meaning people spoke to him of God’s plan, he said. But,

“Carmen’s murder, and acts of much greater violence and cruelty are not part of God’s plan. …

Evil and violence happen in this world because we allow it, not because God allows it. God weeps for all the victims of violence. Every time we as Christians say, “That would be ideal, but that’s not realistic or practical,” we miss the opportunity God has given us to make the world He wants.

Carmen’s mother spoke next. Carmen’s siblings fanned her in the Texas heat and fidgeted close to one another and their mother. The love of this family, the care they showed one another was hard to witness. It brought home how much they had lost.

A freshly-minted freshman about to embark on her high school career, Abigail Zimmerman – the Prophet Abigail, as introduced by her bishop – organized a walk-out at her school, seventeen minutes of civil silent protest at the deaths of those Parkland students and community members. She and her friend spoke at a March For Our Lives. She is organizing. She is activating. “Be the change!” she urged, and the crowd responded, “We are the change,” caught up irresistibly by her spirit.

Did I mention, she hasn’t started high school yet?

April Schentrup left us with the hope and the challenge that instead of struggling with a grief like theirs, we would fight to end gun violence.

“With God’s help, and with those here today, all things are possible.”

Several hundred of us left the park immediately for a fleet of buses bound for Taylor, about an hour away. We pulled up just past the fence bounding a for-profit detention center which ICE is using to incarcerate immigrants – more than five hundred women on any given day – many of whom are seeking asylum, some forty of whom, according to a local advocacy group, were separated from their children at the border and have not seen them since.

We gathered in song in a baseball park adjacent to the prison. Our hosts advised us that the women inside could hear us rallying and praying on their behalf. Some few hundred people wanted to be sure, to be sure that the women knew that they were not alone – “No estas solos.” They walked back out to the baking midday street to stand outside the front gates, to wave, pray, chant.

They saw women waving back, moving pieces of paper in the windows, letting them know they heard us, they saw us, they knew we were here for them. Later that day, the grassroots organization helping the women told us that they stayed at the windows until the last bus had left.

The group was invited to return to the field where our permit applied, instead of the street, where it did not.

Presiding Bishop Curry was speaking by then, pouring out the love that God has for all people, along with the better angels of America that inscribed the Statue of Liberty with its words of welcome, and the mission of us all to be God’s love for the people God has made. All of the people. 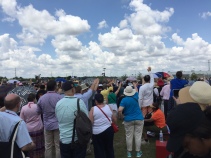 He and President of the House of Deputies, the Revd Gay Jennings led prayers

of the people in English and Spanish, praying to do better. “We will with God’s help,” we promised helplessly.

We were blessed, we were invited to turn and bless the women we had come to encourage with our prayers and presence. We turned back once more, boarded the buses, back to business.

Last night, late (or late enough), I found the Sunday sacrament finally at a Eucharist hosted by Integrity USA, The Episcopal Rainbow. Welcomed to the table by former exiles, one-time “illegals,” who still risk violence to body and soul, breaking the bread of resurrection and the spilt blood of Christ, it was a fitting end to a day of hurting hope.

An earlier version of this post appeared on the Episcopal Cafe

Rosalind C Hughes is a priest and author living near the shores of Lake Erie. After growing up in England and Wales, and living briefly in Singapore, she is now settled in Ohio. She serves an Episcopal church just outside Cleveland. Rosalind is the author of A Family Like Mine: Biblical Stories of Love, Loss, and Longing , and Whom Shall I Fear? Urgent Questions for Christians in an Age of Violence, both from Upper Room Books. She loves the lake, misses the ocean, and is finally coming to terms with snow.
View all posts by Rosalind C Hughes →
This entry was posted in current events, Gun control, gun safety, prayer, story and tagged family separation, gun violence, immigration, Statue of Liberty. Bookmark the permalink.