Standing in the River Jordan, my stole trailed its fringe in the slow, brown water, soaking up history, capillary blessings. 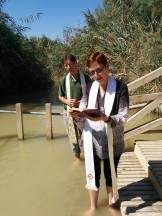 Seven of us waded into the water together, on wooden steps made to lower us gently down. We renewed our baptismal vows in the river where John baptized Jesus, and the heavens opened, the Spirit descending, the voice of God speaking from a cloudless sky.

I chose the stole because it connected me back to the blessing of my own ordination; it was made and worn by a friend, a trailblazer, who had preached for me that night. I wore it to remember that I did not come here alone, nor of my own making, nor under my own flag. 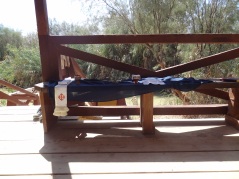 Was it a coincidence that my fellow presbyter, Fr Tim, who celebrated our Eucharist, also had chosen the stole of one who had blazed a trail for him, for social justice, embodying for him the promises of the covenant?

The will to remember, to connect, to reach beyond our small group of pilgrims was, it seems, a vital response to the call of the river in that sacred place.

As we walked back to the bus, our feet quickly drying in the deep Jordanian heat, some talked about the holiness of water itself, blessed by the Spirit of God at the beginning of creation, cycling through its stages of existence ever since.

The air of sanctity which we borrowed from that place, its history and its vocation, breathed beyond ourselves, beyond our stoles and those who let us wear them, beyond our imaginations.

As we all embraced on the slippery steps, laughing with the sheer sacredness of it all, we knew ourselves, our own small space in God’s canvas of creation, well blessed and beloved.

Rosalind C Hughes is a priest and author living near the shores of Lake Erie. After growing up in England and Wales, and living briefly in Singapore, she is now settled in Ohio. She serves an Episcopal church just outside Cleveland. Rosalind is the author of A Family Like Mine: Biblical Stories of Love, Loss, and Longing (Upper Room Books, 2020). She loves the lake, misses the ocean, and is finally coming to terms with snow.
View all posts by Rosalind C Hughes →
This entry was posted in other words, prayer, spiritual autobiography, story and tagged #HolyJordan, baptism. Bookmark the permalink.

2 Responses to Remembering our baptism