Stand up for Advent

A post-sabbatical sermon preached at the Church of the Epiphany, Euclid, Ohio, December 2 2018. The readings are for the First Sunday of Advent, Year C. The text may be more or less as delivered.

It’s good to be back and I have a lot to tell you about and I want to hear about the many things you’ve been doing while I was away, and I hope that we will have time for that over the coming weeks in coffee hours and conversations …

For now, here we are together again, appropriately enough at the start of Advent, a time of new beginnings, the first day of a church year.

A grotto at the Shepherds’ Field outside Bethlehem

During Advent, we will remember that the birth of our Saviour, Jesus Christ, while it is our gateway to God, our touchstone, our own birthday as Christians; that it is not the only time that God was with us. God is not locked away in history nor in mystery, although God is present in both. God is not limited to time and place, nor contained by the competing grottos of different denominations scattered about. God is with us at all times and in all places. God is with us in times of plenty and of celebration. God is with us in unity and in isolation. Tonight our friends and neighbours in the Jewish community will begin their celebration of Hannukah, the festival of lights that celebrates the miracle of God’s divine intervention in a time of great danger, need, and fear. God is with us in such times. God is with us when we cannot see a way through the very present dilemmas of life. God is with us.

We hold fast to that faith even as we pray throughout Advent, Come, Lord Jesus, hoping for some new sign, some new and undisputed intervention, some miracle to rescue us from whatever it is we think we need rescuing from.

I spent this past, last week of sabbatical on retreat, trying to finish my book before I returned. Spoiler alert: I didn’t get it done yet. Nearly. Anyway, I spent part of the week in a hermitage in Washington, DC, and on Tuesday, I went to the Episcopal cathedral church of Saints Peter and Paul, otherwise known as our National Cathedral. During a noonday Eucharist, the presiding priest addressed the signs and portents of Jesus’ apocalyptic sayings, the wars and rumours of wars. He, from the heart of DC, spoke of a war on our common values. When we see such signs, he said, it is time for us to raise our heads, take notice, and stand for what we believe in.

As he suggested, we see such signs all around us. As we draw near to Bethlehem, and the holy family knocks on the doors of houses full and unwilling to become any fuller, the political and religious cartoons of the southern border write themselves, don’t they? No room. Go away. A pregnant Mary choking on tear gas, an infant saviour born into respiratory distress. When we see such attacks on what we hold dear, those whom we hold dear, our neighbours, it is time for us to stand up.

Jesus said, “There will be signs in the sun, the moon, and the stars, and on the earth distress among nations confused by the roaring of the sea and the waves.”

Hiking in the southwest of this country earlier last month, stopping for lunch at the top of a small mountain in Nevada, we met a couple from the Bay area. They had come to escape the smoke of California’s wildfires; to find free air to breathe for a time, before plunging back into the valley, the shadow of that terrifying inferno. The signs are all around us, and the scientific data and reports, of devastating climate change and the damaging effect unchecked human exploitation is having upon our environment. It is time, it is almost too late, some say, to stand up, raise our heads, take notice, and take action.

God is with us. Are we with God on this?

Olive trees at the Garden of Gethsemane

And then, the weekend after we returned from the Holy Land – and trust me, you are going to hear so much more about that journey, more than you ever wanted to know – but I have to talk about this: the Saturday, the Sabbath after we returned home, a man entered a synagogue in Pittsburgh and killed a number of people at prayer. They were martyred, reporters concluded, partly because of their tendency to stand up for what they believed in: to stand up for migrants, immigrants, the desperate and the dispossessed; and partly because of their tendency to stand up in prayer and praise and worship of God. They were killed because of anti-Semitism, because of xenophobia, and because it is all too easy, in this time and place, to find the means and machines with which to carry out mass murder.

Every Sabbath since I have thought of my friend, Beth, whose husband is a rabbi to one of the three congregations who met at Tree of Life, whose family remains whole, thank God, but shattered by the work of grief and of shepherding their community through the funerals that followed and the work of holding out hope, standing strong, raising their heads, continuing firm in the faith they have claimed, their common values. Tonight, they will begin their celebration of Hannukah, the memory of the enduring and unfailing fuel of God’s faithfulness towards God’s people.

Graffiti on the border wall at Bethlehem

After the shooting, I saw calls from the president on down to a local columnist advising that our response to such evil should be to compromise our own values, take up arms against our neighbours, rely on the power of death to counter death, of violence to stem hatred. It is up to each community to assess its risk and its response, of course; but for the state to tell the church that in order to pray in peace to the Prince of Peace, the Giver of Life, the God of Love, we should practice those values only behind locked and guarded doors; I’m not going to stand for that.

Because that, my friends, is a trap. “Be on guard so that your hearts are not weighed down with … the worries of this life, and that day catch you unexpectedly, like a trap,” warns Jesus. Do not become consumed by signs of turmoil. Stand up. Raise your heads. Give voice to the gospel. Expect God. Pray that you may have the strength to stand before the Son of Man at his coming.

[God Before Guns offers opportunities to take action against gun violence through prayer and advocacy.] 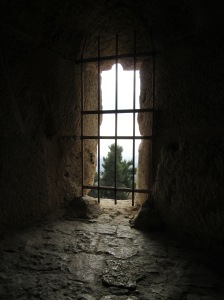 This morning, we are, among other observances, celebrating St Nicolas, Bishop of Myra, patron saint of children and sailors. We remember him mostly in children’s stories of secret miracles, gold coins found in stockings to save some girls from certain human trafficking; maybe not quite as child-friendly a story as we might have hoped after all.

The good Bishop Nicolas considered that all that he had was a gift from God for him to share, to use for the good of those around him, not only for himself. This was his value, that he knew his place not as a guardian but as a selfless sharer, avenue, giver-out of God’s grace and mercy. Nicolas was imprisoned and tortured for his defence and fearless practice of Christianity under the persecutions of Emperor Diocletian, and we remember him as a saint, one of those washed in red and clothed in white, standing before the throne of God, because he did not waver in standing for the gospel that he understood.

We often talk about Advent as a time of waiting, but Jesus directs his disciples to stand, to raise their heads, to look hopefully for their redemption, to search actively for the coming of God’s kingdom, which has indeed drawn near.

Our neighbours at Trinity Cathedral this morning are welcoming a new worshipper, Ansly Damus, a Haitian asylum seeker who has been released on bail after two years in prison waiting, still waiting, for his case for asylum even to be heard. The people who stood for their values of Christian love, mercy, and welcome, who raised up a busload of supporters to travel to Michigan to court this week, finally had their prayers answered in Ansly’s albeit conditional release.

The signs of God’s kingdom are all around us, but they require us to stand up, raise our heads, take notice in order for us to see them over the turmoil and trappings of the world. They require our hopeful persistence, though heaven and earth pass away, holding fast to the promises of God: I am with you, till the end of it all.

May we journey together this Advent, a caravan of pilgrims bent on reaching the kingdom of God, revealed and realized and unmistakably relevant in this time and place, as much as in Bethlehem, as much as ever:

Rosalind C Hughes is a priest and author living near the shores of Lake Erie. After growing up in England and Wales, and living briefly in Singapore, she is now settled in Ohio. She serves an Episcopal church just outside Cleveland. Rosalind is the author of A Family Like Mine: Biblical Stories of Love, Loss, and Longing , and Whom Shall I Fear? Urgent Questions for Christians in an Age of Violence, both from Upper Room Books. She loves the lake, misses the ocean, and is finally coming to terms with snow.
View all posts by Rosalind C Hughes →
This entry was posted in lectionary reflection, sermon and tagged Advent, Bethlehem, climate change, gospel, gun violence, Holy Land, immigration, Luke 21:25-36, St Nicholas, Year C Advent 1. Bookmark the permalink.

2 Responses to Stand up for Advent