I admit I haven’t read the book (yet), but it seems from the press as though She Preached the Word: Women’s Ordination in Modern America, by Benjamin R. Knoll and Cammie Jo Bolin (Oxford University Press, 2018)
is pretty clear in its conclusion that ordaining women is good for women and girls, whether they themselves are called to the collar or no.
(Here’s what I posted at the Episcopal Café about the conversation going around online.)

I remember Margaret. At least, that might have been her name. I was maybe twelve or thirteen; my memory might have shifted a few details over the decades.

As I remember it, she was robed in blue and grey, marked as a Lay Reader. I had never heard the title before – I read the Lesson myself from time to time, but I knew that was not what the Vicar meant when he intoned the term in a low and serious voice, as though it were something slightly dangerous, underground, almost dubious. I wonder what he really thought about it all. 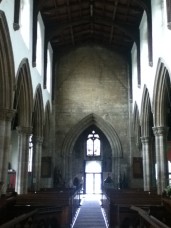 Now that Margaret was a Lay Reader, the Vicar told us, she would preach. As I remember it, he led her to a lectern set up below the pulpit, on the opposite side from the big Bible where I would occasionally read, but set down on the floor, below the chancel steps. I do not remember what she said, although I remember paying attention. Her feminine voice piqued my curiosity in an unfamiliar and exciting way.

I remember noticing at the Offertory how Margaret did not join the men, the priests, on their journey back to the high altar.

The first conversation that I had with a clergyman about my own vocation was informed by Margaret’s voice, and by her position, caught in the crossing. The way that I remember describing it to myself, I wanted to do what she did, and I wanted to do it as completely and as closely as the men.

Seeing and hearing a woman preach, for the first time in my life, opened windows in my soul that I did not know had been barred shut. Seeing her left before the altar, I was grieved and indignant on behalf of us both. Her presence in the crossing was enough to make me imagine a destination I had not known how to dream of before.

I don’t know what Margaret thought about it all. I was a shy child. I never asked her.

I was never brave enough to be first past the breach, for all my bolder thoughts.

But when it came to my own ordination to the priesthood, my preacher was a woman who had broken through barriers on behalf of herself and others to claim her priestly vocation. I once heard another woman thank her for allowing women to discern a vocation as lay person as freely as a priest, bishop, or deacon.

I do not know what Margaret’s choice would have been, had other avenues been open to her. I do know that, standing in the crossing, she opened my heart to the word of God for my life in a register I had never heard before.

Rosalind C Hughes is a priest and author living near the shores of Lake Erie. After growing up in England and Wales, and living briefly in Singapore, she is now settled in Ohio. She serves an Episcopal church just outside Cleveland. Rosalind is the author of A Family Like Mine: Biblical Stories of Love, Loss, and Longing , and Whom Shall I Fear? Urgent Questions for Christians in an Age of Violence, both from Upper Room Books. She loves the lake, misses the ocean, and is finally coming to terms with snow.
View all posts by Rosalind C Hughes →
This entry was posted in spiritual autobiography, story and tagged gender equality, lay readers, ordination, preaching, women priests. Bookmark the permalink.