It was Mother’s Day weekend, a weekend of mixed emotions, to say the least. I am among the fortunate. I spent the day surrounded by family, celebrating our eldest child’s college graduation in the Columbus sunshine.

On Saturday, her younger sister and I marched across the Hope Memorial Bridge in Cleveland to remember those lost to gun violence, and to hope actively for safer times to come.

via cleveland.com . The sign said, “In God we trust, not guns.”

I remember when the children were small, before we left Singapore, sitting by the pool one day watching them play. A recent arrival, a nurse named Nicki from New Orleans, was recounting her day, rehearsing with her 12-year-old son the route he would take to his new international school, across to the centre of the island. One bus driver was shocked that this mother felt the need to accompany her child on the public bus, and Nicki was concerned: was she being too protective?

“It was the same look,” she said, “that I got from other parents back home when I always insisted on asking if there’s a gun in the house before letting him go over there to play.”

I watched my toddlers and their kindergartner sister splashing in the shallow end. I thought of how I had never in their lives needed to worry about whether there was a lethal weapon in a home into which they had been invited. I could hardly imagine being in a situation where that might be a regular concern, one to check out before a play date, just in case someone might get killed.

At the rally Saturday, we heard from a gentleman who spends too much of his time visiting with the victims and relatives of gun violence in hospitals and in funeral homes, trying to wrap his arms around the wound and wrap his mind around the anger and frustration that is killing people before his eyes.

We heard from a police officer who told us that three years old is the most common age for an accident involving a child and a gun. In front of us all, she wished to God that her own grown son was not allowed a gun. It didn’t make him any safer. 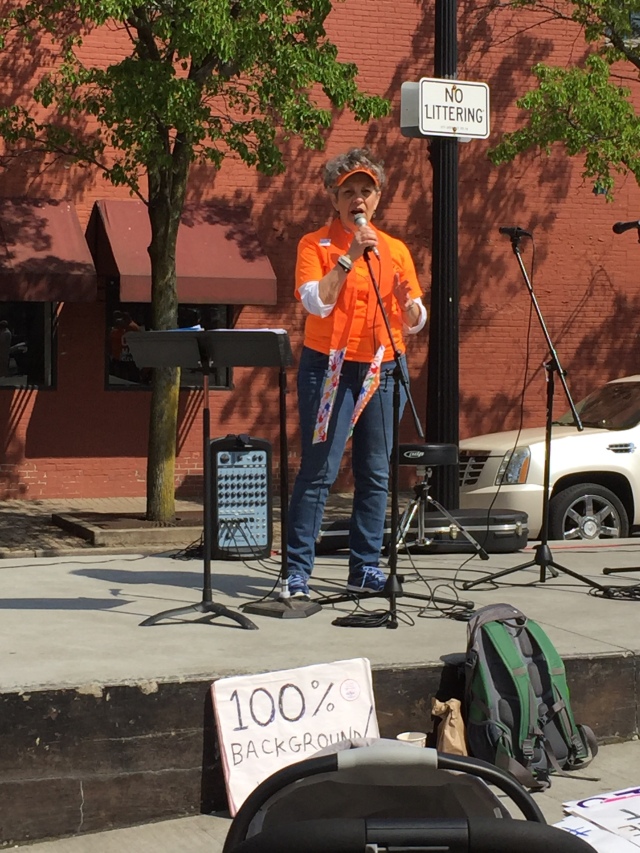 We heard from pastors and parents, mothers and men with t-shirts proclaiming “Moms Demand Action,” and babes in arms, toddlers in tow. Always ask, they said, if there’s a gun in the house that your child is going to visit, and if so, how it is secured.

We heard from the Distinguished Gentlemen of Spoken Word, who are “living in the fire but we do not burn.” Young men demonstrating how grow up within a world of danger with dignity, passion, and respect for themselves, for one another.

We heard the names of those young people their age and younger (as young as five months) who had died in Cleveland of gun violence since last year’s march and rally.

My youngest daughter stood beside me in the sunshine, the toddler grown now, texting her friends about gun safety. I remembered Nicki, and the son she protected with fierce wisdom and uncompromising common sense. By the time school started, she would let him ride the bus alone, having made sure he knew the way, the rules of travel, the safe way home. She would ask what she needed to know for his security and her peace of mind, and then hope, trust. Love.

The organizers of Saturday’s march and rally, God Before Guns, told the Plain Dealer, “Gun violence is definitely a mother’s issue… We’re emphasizing how many children are victims of gun violence.”

And they brought unto him also infants, that he would touch them: but when his disciples saw it, they rebuked them. But Jesus called them unto him and said, “Suffer little children to come unto me, and forbid them not: for of such is the kingdom of God.” (Luke 18:15-16)

2 Responses to Suffer the children