The children are playing “parade.” They cut branches and leaves and grass to wave like flags. They throw their coats on the earth to make a colourful parade ground. They ride on their neighbour’s baby donkey and their friend’s large dog. They take turns riding, while the others sing and shout and laugh, Hosanna! – a childish parody of Pilate’s parade processing in by another gate across the city.
The stranger comes in through their little decorated gate. They have heard of him; strange stories, wonderful things. He is riding a small donkey, as though he were one of them.
The children sing and wave their branches. Their parents join them, laughing and singing “Hosanna!”
“Blessed is the One who comes in the name of our Lord!”
Their voices trail away as they listen to what they say, and the stranger continues to smile and to wave and wink at the children … 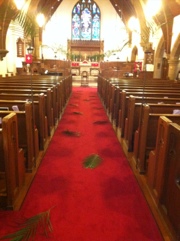 Like Loading...
This entry was posted in other words and tagged Holy Week, Palm Sunday, parade, Pilate. Bookmark the permalink.