If compassion were king

There’s a whole lot that could be said about King Herod Antipas, son of Herod the Great, who left little greatness in his own wake. The little that we see of him in the gospels is instructive enough. He was the king, dancing in the footsteps of David; but at certain crucial points in his reign, he cared more for his own glory than for the glory of God, and followed popularity and privilege more closely than the prophets.

The ruins of Herod’s palace, where John was imprisoned and beheaded

Herod loved to listen to John. Later, he was pumped to meet Jesus. He enjoyed spiritual celebrities; he wanted their glitter to garnish his reputation; he hoped that their righteousness might rub off on him and polish up his halo. Herod had the faith of his fathers (more of that in a moment), and he hoped for the best; but he failed the test of justice, and of love. He also failed to learn his lesson even from the regrettable death of John, because not too long after killing him, he sent Jesus back to Pilate to suffer a similar fate.

Herod, simply put, was selfish. He suffered, whether out of insecurity or over-confidence, from the obsessive adoration of himself. Perhaps he got it from his father, his father Herod the so-called Great, who massacred the children of Bethlehem in order to eliminate competition from the child of God. Herod, this Herod, Herod Antipas would rather cage and kill an innocent man than lose face before his fine guests. He saw and feared for the divine image only in himself. He made himself the idol of his own imagination.

Such selfishness binds people to ourselves, curbs our capacity for compassion, turns our hearts sour and makes our spirits bitter. Selfishness shocks the loving conscience. It is something to which we are all susceptible, as individuals, as families, as nations. But we know better. We know a better way.

As you know, I had the opportunity last weekend to travel to Texas to join in part of the General Convention of our Episcopal Church. It was quite the experience. There is something about gathering a few thousand Episcopalians into one tight city centre that changes the very air. And there is something about being packed into a revival service, preached by Presiding Bishop Michael Curry, that makes the spirit soar, like the pigeon haunting the House of Deputies, sometimes suspected to be the Holy Spirit in disguise.

Love is not selfish. Love reaches out from its centre, spreads its wings, puts forth branches, shelters the little ones in its arms, bears fruit to feed the masses, breaks open the cages that imprison us in a mess of our own making. Love looks a lot like Jesus, come to think of it. Or Jesus looks a lot like love.

And here’s why I need to tell you, not about Saturday night, but about last Sunday. I need to convey to you the love and the compassion that I encountered, that I witnessed, because it broke my heart, and it brought me to my knees. 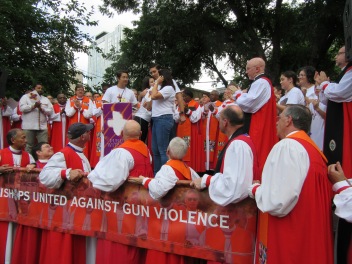 You know the events that I attended. Some of you have already watched the videos on Facebook. We began, with a whole bunch of bishops, praying, and listening to the family of Carmen Schentrup, killed on Valentine’s Day, Ash Wednesday, at her high school in Parkland, Florida. Carmen’s father and mother stood on stage in a small park in front of a large crowd, with Carmen’s siblings fidgeting beside them, and out of their grief, and out of their love, they wrung life.

Selfishness, the selfishness of men, and women, whose lust for sex or power or celebrity or security blind them to the humanity, the image of divinity within those set before them, the selfishness that separates them from their own humanity; such selfishness has no place in the heart of God, who gave Godself freely, indiscriminately, in creation, in the Incarnation, whose selfless love, whose self-giving love is our salvation.

After the service in the park, we headed by bus out to a detention centre run by a for-profit prison company for the Immigration and Customs Enforcement agency, ICE. It houses over 500 women each day, most of whom are asylum seekers. About forty of the women are known to have been separated from their children at the border. As of last weekend, they had not seen their children since. 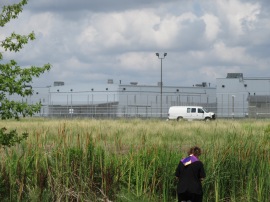 Compassion is the quality that allows us to enter into the prison of another person’s suffering. If Herod had practiced compassion, he would have seen the trap he had set for himself, pretending to know better than John, than Jesus. Compassion lets us see reflected in a mother’s tears the cycle of gun violence in which we are caught up, irresistibly, unless we choose resistance. Compassion lets us switch places with those women waving at the windows, to see the systems of alienation in which we have imprisoned ourselves. 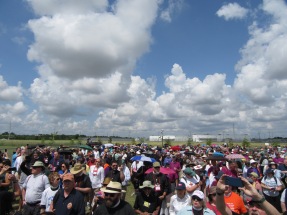 Compassion. There was a moment, in the middle of that very hot field under the Texas midday sun, listening to the prayers and the love poured out, melting; there was a moment when I chanced to look up at the tall man standing next to me, and he was Philip Schentrup, Carmen’s father, and he was looking at his surviving children, and his wife, and they were standing under the hot Texas sun, praying and bearing witness to these women whom they had never met, would most likely never meet. That was the moment when I realized how much was being asked of us as disciples of Christ.

Because if I were in their sandals, I do not think I would have made it. If I had suffered as they have suffered, and if I had somehow managed to muster up the courage to address our crowd that morning, by now, I would have been curled up in a dark and cool hotel room, hiding from the world.

The only reason I can think of for that family to be on that field was that their faith is a fuel that never runs dry, and that compassion, Christ-like compassion has courage beyond imagination, the courage even to face the cross; and that love, real love, the kind of love that we mean when we say that God is love; the kind of love with which we are commanded to love God and to love our neighbour as ourselves; that love makes all things possible.

Thoughts and prayers are easy to say and to send up, but love, love in action: that breaks down barriers, wrecks the walls that we selfishly set up between us. Love breaks hearts, and love lets the healing begin.

That’s kind of what April Schentrup told us back in the park; that with God, and with one another, together, even in the face of all that has beset us; when selfishness and the self-interest, the fear and trembling that it breeds is set aside; when love takes action, when compassion is king, all kinds of good news is possible. 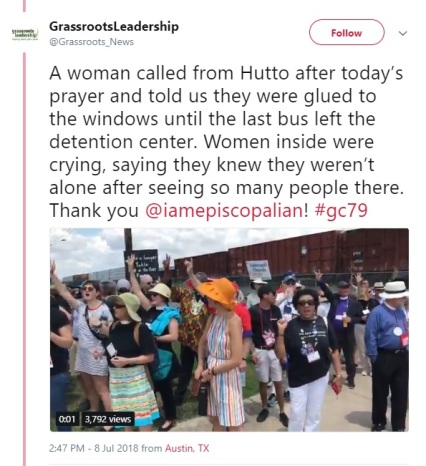 And never think that there is nothing to be done. Never imagine that your smallest gesture of compassion, your insufficient word of kindness, your little piece of love in action is wasted.

We got a message back Sunday night from the local grassroots advocacy group that helped set up our service outside the perimeter fence of the prison facility. One of the women inside had called them after we’d gone, to tell them that they had stayed at the windows, watching us, until the last bus was driven out of sight.

Love matters. Love makes a difference. Faith and hope are lost without love. But with love; the kind of love that we mean when we say that God is love; the kind with which we are called to love God and our neighbour as ourselves; through the compassion of Christ and the love of God, all things will be made new, and the world will change, will turn from the inside out, as God intended.

Rosalind C Hughes is a priest and author living near the shores of Lake Erie. After growing up in England and Wales, and living briefly in Singapore, she is now settled in Ohio. She serves an Episcopal church just outside Cleveland. Rosalind is the author of A Family Like Mine: Biblical Stories of Love, Loss, and Longing , and Whom Shall I Fear? Urgent Questions for Christians in an Age of Violence, both from Upper Room Books. She loves the lake, misses the ocean, and is finally coming to terms with snow.
View all posts by Rosalind C Hughes →
This entry was posted in current events, lectionary reflection, sermon and tagged #GC79, April Schentrup, compassion, Herod, Michael Curry, Philip Schentrup, selfishness, T Don Hutto detention center. Bookmark the permalink.